My Conviction in Gold Royalty Companies and Bitcoin

We were one of Wheaton Precious Metals’ seed investors in 2004, when it was known as Silver Wheaton. Because Franco-Nevada wouldn’t be spun off from Newmont Mining for another three years, Wheaton had first-mover advantage. It was something new, something different. This, coupled with what I recognized as a superior business model, gave me the conviction to allocate capital into the fledgling company, a move that turned out to be highly profitable.

Today I have the same conviction in blockchain technology and digital currencies. As of the end of October, the initial coin offering (ICO) market had raised $3 billion so far this year. That’s more than seven times the amount generated in crowdfunding in all of the previous years before 2017. And Bloomberg just reported that Google searches for “buy bitcoin” recently surpassed searches for “buy gold.”

My Conviction in Gold Royalty Companies and Bitcoin 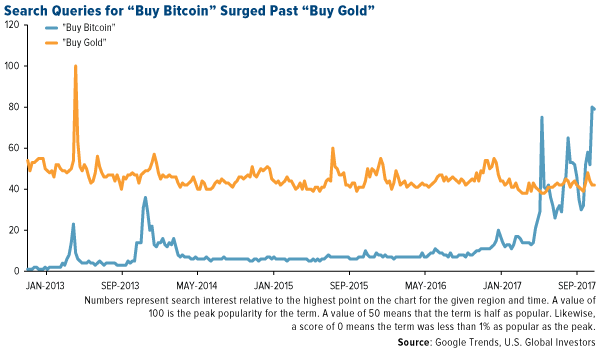